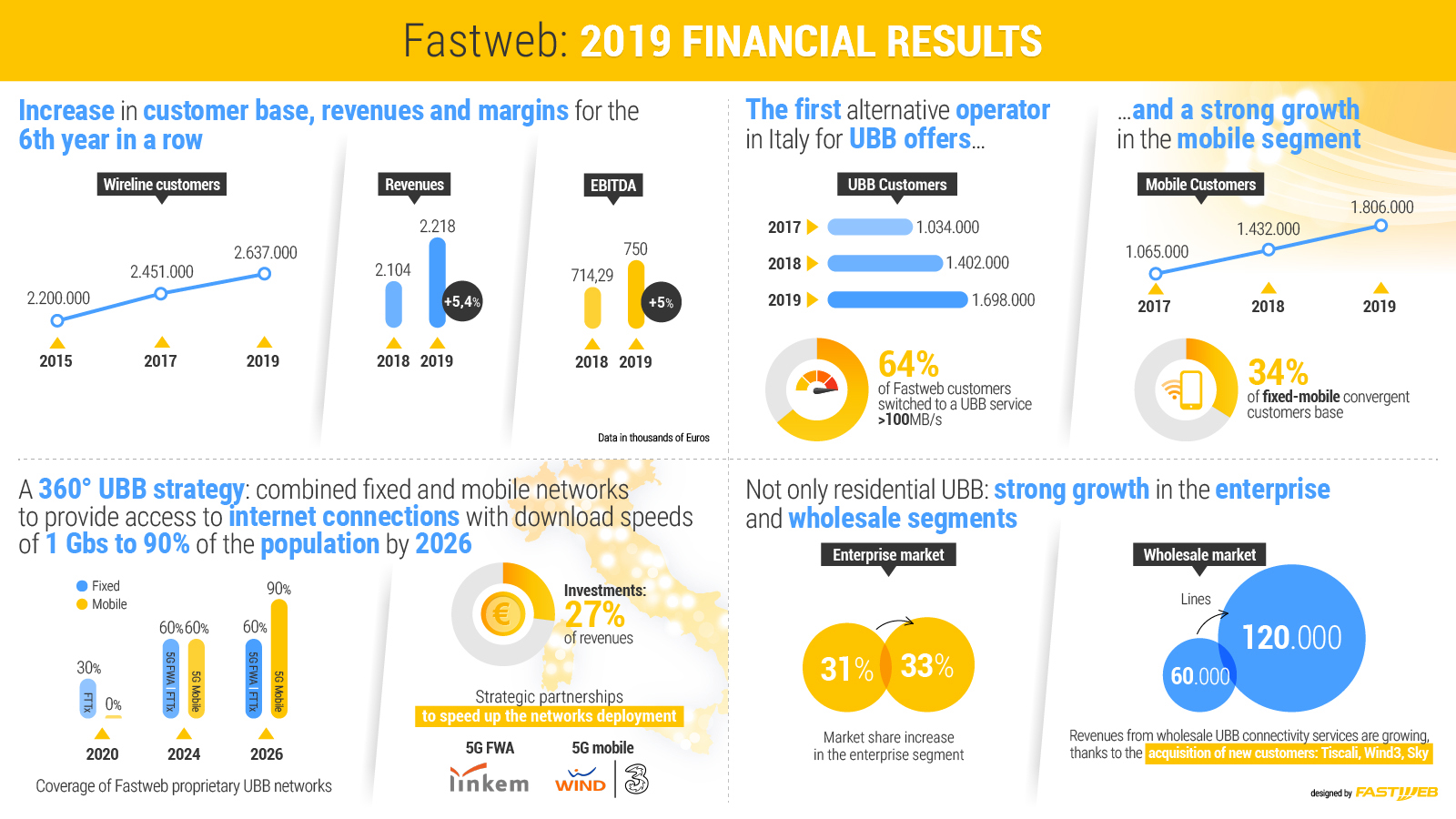 Another positive year for Fastweb, Italy's subsidiary of Swisscom Group, with customers and margins growing for the 26th consecutive quarter. The results published today confirm the unique positioning, highlighted by Mediobanca R&S report issued in November: Fastweb is the only operator among Italy's and European telecom companies with a steady growth between 2014 and 2018, both in terms of revenues and margins.

Fastweb keeps pursuing its "infrastructured OTT" convergent strategy, leveraging a combination of fixed and mobile new generation infrastructure to offer gigabit connectivity to its customers while, in the meantime, focusing on a "OTT like" approach in terms of simplicity, effectiveness and customer-orientation.

Fastweb confirms its leadership in terms of investments – 600 million Euro, 27% of revenues – addressed mainly to the development of its UBB coverage through one of the widest combined deployments of fixed and mobile new generations networks (FTTX – 5G mobile – 5G FWA) in Europe.

Specifically, thanks to the recent agreement with Linkem, a leader in FWA deployment in Italy, which will allow the rapid deployment and the optimization of Fastweb planned 5G FWA network, the number of families reached by 1 Gigabit connectivity on Fastweb proprietary network will go from 8 million (covered as of today by FTTx) to 16 million by the end of 2023, one year earlier than previously announced. 5G FWA commercial services will be launched by Q3 2020.

As per the 5G mobile network, following the agreement signed last June with WindTre and the issuing of the license that marks the entrance of Fastweb in the mobile market as an MNO, the co-investment for the deployment of a national 5G network entered the operational stage of planning and roll-out, with the launch of the first 5G services expected around mid-2020.

Fastweb consolidates once again its leadership position in terms of penetration of ultra-broadband connectivity services. By December 31st 2019, 1.698.000 wireline customers opted for an ultra-broadband offer (+21% on previous year). Approximately 64% of Fastweb wireline customers - up 9 pp on 2018 and a unique figure in Europe - switched to a service with download speed up to 1 Gb/s. This outstanding percentage confirms the growth in the demand for high-performance connectivity and Fastweb commitment to promote the digital transformation of Italian families and companies. A positioning confirmed by Italy's telecom watchdog AGCOM in its most recent Communications Observatory, according to which Fastweb is the first alternative provider in the UBB market with a share of 22,6%.

2019 was an excellent year for the mobile segment as well. As of December 31st 2019 Fastweb has 1.806.000 mobile customers, up 26% on previous year and revenues of 175 million Euro (+19% on 2018). Overall customer growth is steady despite intense competition in the market. Fastweb confirms its focus on fixed-mobile convergence - increasing to 34% the percentage of customers adopting both fixed and mobile services (+4pp in 12 months).

The Enterprise Business Unit performed extremely well over the year in respect both to the  contracts with the central and local Public Administrations as well as to the provision of connectivity and value added services to private business customers: Fastweb market share in the Enterprise Business market is now 33% in terms of revenues (+2 pp yoy), with outstanding performances in specific segments such as services to public administrations and ICT value added services. Overall revenues of the division total 862 million (+10% on previous year).

The performances of Fastweb Wholesale division confirm the previous year trend: the provision of wholesale data connectivity services to other telecom operators in the national market is growing steadily: 120.000 lines are provided, up 100% on previous year and showing a growth trend that will likely continue in the next months, due to the acquisition of new high profile customers such as WindTre and Sky, adding up to the division's well-established customer portfolio, including Tiscali and other high profile operators.

Fastweb confirms thus its execution capability and the promptness in leveraging all its assets – the extensive fiber network, the spectrum portfolio, the data centers, the strategic partnerships - to provide an outstanding service to all customer segments and provide to an increasing percentage of the population a gigabit service through a combination of UBB technologies.